TIPS for Thinking About Ghosts:

TV and movies make it look like entertainment, but are ghosts more than something just created in a Hollywood studio? After all, it doesn’t take a ghost hunter to see that some pretty weird stuff goes on around us. Maybe you’ve heard about people claim they’ve seen a ghost or some other kind of scary supernatural event. So, are they making it up? Are they mentally disturbed? Or Is there another explanation?

It could be that some people make up stories about ghosts, while others may actually have a mental illness. But is it possible that ghosts are in fact real? It all depends on what a person means by “ghost.”

By far the most reliable resource to learn the facts about this kind of thing is the Bible. Far from being a book of fairy tales, the Bible contains proven truth about supernatural things. And it’s in the Bible where the truth about ghosts can be discovered.

First, we need to realize that the Bible compares death to a sleep. In other words, when a person dies, they don’t go to heaven, or anyplace, for that matter. (That happens when Jesus comes back to earth, but that’s another story.) Here’s just one of many Bible verses that tells us about what happens to people when they die:

“For the living know that they shall die: but the dead know not any thing” (Ecclesiastes 9:5, King James Version).

Dead people are in a state of sleep, or unconsciousness. Since ghosts are supposed to be the spirits of dead people, well, you can see there’s no truth to that idea!

So what do people sometimes see that look like ghosts? The Bible is clear about that as well:

“For we wrestle not against flesh and blood, but against principalities, against powers, against the rulers of the darkness of this world, against spiritual wickedness in high places” (Ephesians 6:12, King James Version).

In other words, “flesh and blood,” or humans, are in a battle against supernatural forces. These evil angels are known as demons, and demons have the power to masquerade as dead people—or ”ghosts.” That’s what people are seeing.

Now, don’t be frightened about this. If you’ve accepted Jesus as your Savior, He’s not going to let any of this stuff into your life. So now you know the truth about “ghosts.” Stay away from Satan and his evil forces, and you’ll be safe and sound in Jesus. As the Bible says, “For I am persuaded, that neither death, nor life, nor angels, nor principalities, nor powers, nor things present, nor things to come,

Nor height, nor depth, nor any other creature, shall be able to separate us from the love of God, which is in Christ Jesus our Lord” (Romans 8:38, 39, King James Version).

The Ghost of La Llorona

The attackers were about to see a most startling sight. 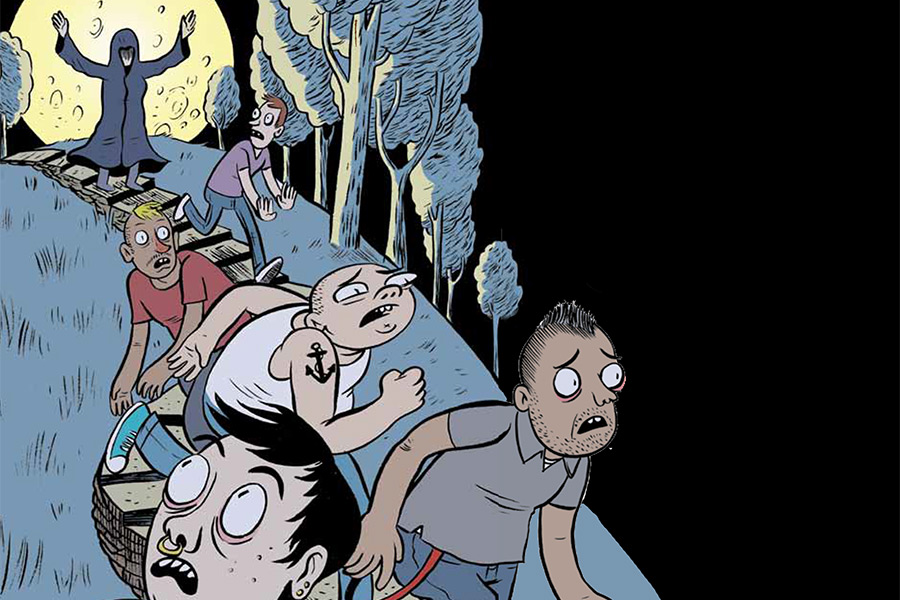 Concealed by the tall grass, the five boys crouched in the shadows. They were ready to spring on the girl making her way up the steep, winding stone stairway. The full moon cast an eerie glow on her, but the boys couldn’t see her face.

Suddenly one of the boys gasped and crossed himself. The figure was veiled head to toe in long, dark robes that flowed behind her in the wind. Her face was hooded—or was it that she had no face?

Just then the figure stopped, turning straight toward them. She opened her arms wide, and the boys, to their horror, heard the unmistakable sound of desperate weeping.

With screams of terror they fled for their lives, calling on the virgin Mary and all the saints.

La Llorona supposedly was the ghost of a woman who—as the legend went in Colombia, South America—would sometimes appear to wicked men, wailing for her murdered children.

But now, on this night, La Llorona was left standing alone. A cloud hid the moon, and in the darkness she smiled.

The next day at the neighborhood store I overheard one of the boys telling his story. “Her face was a skull, with burning eyes! She had great wings like a bat, and her hands were only bloody bones!”

Those crowded around crossed themselves. I smothered a snicker and peeked under my arm. No bat wings there. The skin on my face and hands was just fine, too. Still, I had no doubt that the boy had seen strange things. The moonlight, drugs, and fear had all played a part.

I hadn’t intended to be, but when I’d seen the attackers lying in wait, I had done the first thing that came to mind. I normally wouldn’t walk around that area alone at that hour, but I’d been at a meeting. It had run so late that I’d missed the last bus. The meeting was at a synagogue for Jews who believe in Jesus; that’s why I’d worn a veil and long dress.

Walking home, I’d worried a little about whom I might encounter. I must admit, the legend of La Llorona and other haunts had crossed my mind too, even though I don’t believe in that stuff.

Now I know that superstitious minds are easy to play tricks on. I also realize that the devil and his evil angels can fake a ghostly “haunting.”

But I grow in courage when I recall this Bible verse: “Fear of man will prove to be a snare, but whoever trusts in the Lord is kept safe”