Is the Devil real?

TIPS thinking about the Devil?

By now, you’ve probably noticed that some really bad stuff happens in our world. Earthquakes, crime, war, and so much more. True, some really good things happen too, but it’s still pretty easy to tell that something bad is going down on Planet Earth.

That’s because the devil is real.

Far from a collection of fairy tales, the Bible is a book whose writings were collected over a period of about 1600 years. Like so many good movies, the Bible revolves around the battle between good and evil. The forces of good are championed by Jesus Christ, while the evil forces are led by the devil, otherwise known as Satan. Although the forces themselves operate in a dimension that we can’t see, the results of this battle are everywhere. From bullying to racism to death itself, it can all be traced back to Satan and his evil forces.

The name Satan means “adversary,” or “enemy.” According to the Bible, his original name was Lucifer, and he was a good angel. (Yes, angels are real too.) A dramatic Bible passage shows how everything changed:

Uh-oh, this isn’t good. Satan and his evil forces have set up camp on Planet Earth! Yep, that’s why so much goes wrong on our planet—Satan and his demons are meddling in what takes place. Bullying, starvation, lying, sadness, cheating, and so much else—it all comes from the dark side.

But there is good news too! “Submit yourselves, then, to God. Resist the devil, and he will flee from you” (James 4:7). Following God doesn’t mean you will never have problems, but God will give you strength and wisdom to help you get through the messes Satan brings into our lives. Beyond that, “God . . . will not let you be tempted beyond what you can bear. But when you are tempted, he will also provide a way out so that you can endure it” (1 Corinthians 10:13). That’s good to know, huh? Yes, the devil is real, but so is God. With Him in your life, you can get through anything! And by the way, we know Who is going to win the battle between good and evil. (Hint: it’s not Satan.)

________ * Being baptized involves being lowered under water, which symbolizes the “washing away” of your sins and the beginning of a new life devoted to Jesus. Don’t worry—you’ll only be underwater for about two seconds!

The prohibited activity turned out
to be more than simple fun

as told to honoria carriger 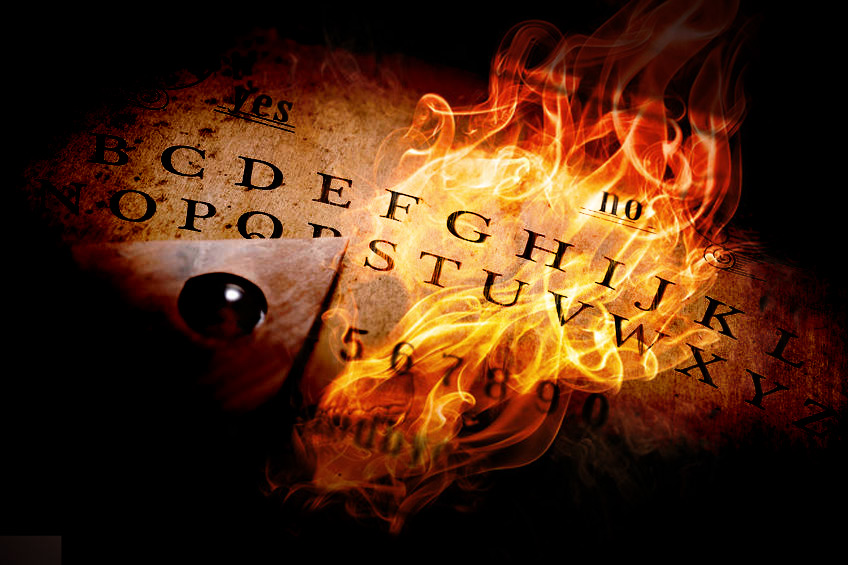 Are you sure we won’t get caught?” I whispered to Amy, who sat beside me with the Ouija board on her lap. We sat in a circle with the dormitory lights turned off, and the feeling was eerie. It had been Amy’s idea for us to all study in her room after classes for the day, but I had gotten a bad feeling when she had pulled out a packet of Tarot cards from her pocket and offered to tell fortunes.

You know we’re not supposed to mess around with stuff like that,” Shayna hissed nervously.

“Mr. Rod says that it just invites the devil in… “

“Oh, there’s nothing wrong with cards and the Ouija board,” Amy scoffed. “It just uses the energy all around us in the air to tell us what will happen; there’s no power coming from the devil.

I was nervous as well, but as Amy dealt out the cards and told us our futures, I joined in laughing with the other girls at the sometimes silly outcomes from the cards. Maybe Amy was right; it was just good fun.

“You’re going to marry Billy
Howard when you grow up!” Amy squealed as she told Julia her fortune. Then she looked at me and said, “It’s your turn.”

“I don’t know…”I said my mind suddenly darting backy? l to some of the lessons Mr. Rod had taught us in religion class.

I remembered one Bible verses he’d shared: “Let no one be found among you who sacrifices their son or daughter in the fire, who practices divination or sorcery, interprets omens, engages in witchcraft” (Deuteronomy 18:10).

“Um, I’d rather not,” I finally replied.

“But we’re having fun!” Julia objected. She sighed, then said, “OK, if you don’t like Tarot cards, let’s use the Ouija board. It’s just a I fun game.”

I felt uneasy, but nodded. Amy’s face lit up, but just as she pulled the Ouija board out of the box, a knock sounded at the door.

Everyone froze, and Amy looked at me sharply. “I only invited three girls. Did any of you tell anyone else to come?”

I shook my head, but secretly I felt relieved. I really didn’t feel comfortable with all this supernatural stuff. I stood up and went to the door quicly and opened it. I was surprised to find Mr. Rod standing there.

‘Mr. Rod!” I stammered, looking quizzically up at him. “You’re the boys’ dorm supervisor. What are you doing here?”

Mr. Rod’s eyes were sad as he stepped into the room. “Someone told me that Amy had a Ouija board in here and I came to see if that was true. If so, we need to get rid of it. You girls know we don’t allow these kinds of things in our academy. It’s an invitation for the devil to come in.” He bent down and picked up the board, and Amy handed him the Tarot cards.

Looking at all of us before he left, Mr. Rod said, “I’ll talk to all of you after chapel tomorrow.”

The next morning was a busy one, as we had to make up all the homework we hadn’t done when we had been telling fortunes the night before.

After our first class period, study hall, we headed off to chapel. Filing in quietly, I went to sit with Amy, Julia, and Shayna, but some one called us.

“Girls, would you come with me, please?” Turning around, we saw our principal, Mr. Wilkinson, motioning for us to follow him. I groaned quietly, looking nervously over at my friends, but we headed off to his office.

When we arrived, we all sat down and waited for the principal to speak.

“I don’t know if you girls noticed, but Mr. Rod isn’t here today. He’s at home because he didn’t feel up to teaching today.

Something happened last night that I think you should know about.” We looked nervously at each other as Mr. Wilkinson continued.

“After he took the Ouija board and cards away from you, he headed down to the wood furnace in the old teachers’ dorm to burn them. When he opened the furnace, he threw the cards in, and they burned up. But when he threw in the Ouija board, it flew back out. “In fact,” our principal continued, “Mr. Rod threw the Ouija board into the furnace four times. Each time the board shot out as if someone were throwing it back at him. Finally Mr. Rod prayed over the board, and told the board to stay in the furnace by the name of Jesus. The board went in a final time, then burst into purple flames.”

As Mr. Wilkinson finished, we all sat quietly, stunned by what he had told us.

Finally Amy quietly said, “It had only seemed like fun.

“It’s never smart to disobey God and dabble in things He’s told us to stay away from,” Mr. Wilkinson reminded us. “Anything could have happened with that Ouija board, and I hope you have learned your lesson.”

As we left Mr. Wilkinson’s office, I thought seriously about what had happened. God had told us those things in the Bible for a reason—to protect us from evil forces. I was thankful that I’d learned my lesson before something else had happened.